This is not political.

Posted on December 4, 2015 by Cat Q.
Like most of you, I met a lot of people in college and made a handful of friends. Some of them have become almost like family, like the cousins you grew up with and don’t see nearly enough these days but who you are certain will be a part of your life for the rest of it. Some I’m sure I’ve already forgotten. And some I’ve stayed in touch with via social media for one reason or another.
In the latter category is a guy that I didn’t actually know well in school. In fact, I’m not quite sure how we met each other at all. I remember only that he sat dead center in the middle of class (Shakespeare? AmLit survey?), smiled at everyone, and was quick with the smart, relevant comments (sigh, I miss college). Somehow, at some point, we became friends on Facebook.
In the years since, I have learned a lot about him. He grew up in a small town in north Georgia. I know he made an impression on his classmates and teachers because I have read their sweet recollections and glowing comments on my newsfeed. After graduating from college he went on to get a law degree, get married, have a baby. The regular American small-town life stuff. He’s very active in his local and religious communities, passionate about the law, and clearly smitten with his daughter. We share a lot of similar views on social and political issues, but we also disagree on plenty. No matter.
After having my son I deleted several people from my FB page; a whole lot of those loose acquaintances from college were the first to go. But I kept my friend because I enjoy his perspective. I like his passion. I like how he’s respectful and open-minded and not afraid to really examine and grapple with big issues in a public sphere. Our real-lives may never cross again, but I’m thankful for our online connection.

The other day, following the California terrorist attack, he reposted a status that his wife had reposted earlier. It didn’t have anything to do with me or my life, but I read it and it weighed heavily on me.

This is what he posted: 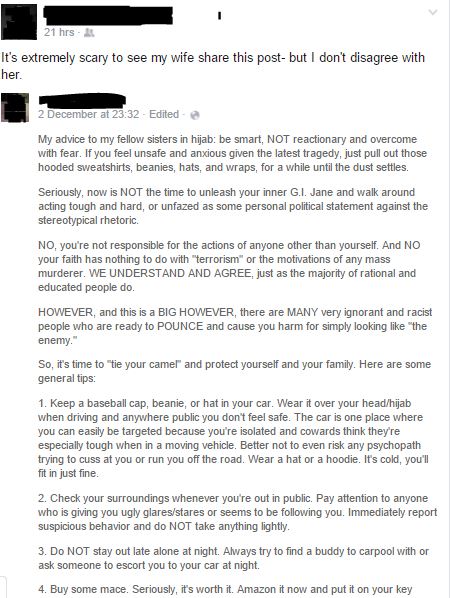 I don’t think I need to post the rest of the original note for you to get the gist. It goes on and on. Be on guard. Protect yourselves.

His small comment stayed with me. All I could think about was my own husband and how he would feel if he suddenly found himself in my friend’s position. What if Wes left for work each day knowing that I feared for my own safety, and the safety of our infant, just going to Kroger?  That I was scared of drawing any attention to myself, or being noticed at all, for fear of retaliation for a crime I had absolutely nothing to do with? What would that do to him? What would it do to me? I can not even imagine. It stops my breath.
No, Islam is not a part of my life. The first time I ever even heard of it was in a 7th grade world civiliations course in NY. The religious ambivalence of my own parents meant that I rarely paid much attention to the faiths of my friends growing up. I don’t remember who was Catholic or Jewish or Muslim or Buddhist. I didn’t care. The next time I remember hearing the word “muslim” was in the days following 9/11; I was 17 and glued to the TV in my first apartment, listening to shocked American voices trying to make sense of something that doesn’t make any. I spent about six months a decade ago studying Islam, but I do not have any close friends who are Muslim. A co-worker here, a classmate there, a few students come and gone, yes,  but no one in my family, no close friends. So hey, maybe I shouldn’t be concerned.
But I am. I am a Christian, a follower of Jesus Christ, and that is the most important thing anyone needs to know about me. Any bit of patriotism I have will always come after that. Christ is my first allegience.
I can write and say statements like the one above without apology, unlike my friend, who is now expected to shout from the rooftops “I AM AN AMERICAN! A GEORGIAN! A PROFESSIONAL! A FAMILY MAN! ISLAM DOES NOT DEFINE ME!”
How sad. Truthfully, I hope my faith defines me. I hope you look at my life and know without question that I love the Lord above all else. All else. That is probably really weird to some of you. It may even make you uncomfortable or you may like me less knowing that I say things like that aloud. It’s okay.
I felt compelled this morning to write this, to be public with these thoughts, as visible as a ḥijāb, because my heart is heavy for everyone who is afraid. I am concerned for my friend, for his wife, for their child, anxious about the burden of proof they are now expected to provide:”Here, look at our lives. I promise we aren’t like that.”
On another level, I see our lives reflected in theirs: a devout young family, wrestling to reconcile what they believe with a culture that at best begrudgingly tolerates and at worst actively despises those beliefs and those who subscribe to them.  And where do we think the demonization of “different” will end?  Once we round up the wrongthinkers, can we be sure we’re safe? Can we be certain we won’t be next? I read one sentence on the Facebook page of a guy I barely know and I cried, because this is not the America I wanted to come home to.
Look, I’m not naive. I get that there are radical Muslims plotting this very second to cause as much carnage and bloodshed as possible. There is evil in this world. I get it. I’m just saying that I don’t want my politics to prevent me from empathizing with people. I don’t want to contribute to the rhetoric of fear, of alienating people, of passively condoning violence. No person in the United States of America should be scared to practice her religion publicly. It’s not policy nor culture that I am in fear of losing, but heart, humanity, compassion, basic human decency.

My friend read this post and has allowed me to quote him here:
“Just a minor point- I wouldn’t ever scream Islam doesn’t define me, I would scream the terrorist don’t define me. My Islam shared with over a billion others is a peaceful, beautiful, deeply compassionate religion that should and does permeate every facet of my life.”

To be clear, I didn’t think he would deny his religion or its importance in his life, but I wanted to point out that America expects him too. Perhaps we are so comfortable with nominal Christianity that we wish those of other faiths would share our religious disingenuity.

For three years, I lived on a tiny little island in the South Pacific called Ta'u, where I taught elementary and high school English. Much of this blog is a chronicle of my time there, and of the travels we were able to do while we were on that side of the world. Now, I'm doing a different kind of travelling in the suburbs of Atlanta, Georgia with my husband and two children.
View all posts by Cat Q. →
This entry was posted in American Samoa, United States and tagged America, Christianity, Current events, Islam, Islamaphobia, San Bernadino. Bookmark the permalink.

1 Response to This is not political.