Our main living areas are still not finished because Home Depot has still not received our flooring order (argh). But that’s okay. It’s cool. We’re not worried about it. I’m not gonna worry. No sir. Totally chill over here.

We have a pretty big family event coming up next month that we absolutely can not reschedule and I’d really love it if our house was not a construction zone. We’re going to try to get it to a place where it’s presentable this weekend–throw some rugs on the sub floors, bring in some chairs–so hopefully that will make it all more liveable until the hardwoods arrive.

In other news, the master bath is 100% finished! All that it lacked really since my last post was a mirror. I had this great one I got years ago at Old Time Pottery for less than $10 and it turns out that it looks awesome in there. Here’s our new vanity area: 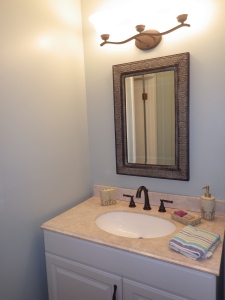 Er mer gersh I love it.

And here’s our totally d-o-n-e master bedroom! Complete with the gigantic, ridiculously ornate furniture we purchased as newly weds. (I still love it though.)

Yesterday while the Beard worked, I tested out the nap-ability of this room and it is pretty extraordinary.

The guest bedroom and the new roomie’s bedroom are both pretty much finished as far as work goes. They just need to be organized and what not. We are using the guest room as storage right now while the living room is subfloor-y so I can’t do anything in there other than unpack a million boxes and marvel at all the junk we have. (We have so much stuff.)

The kitchen and guest bathrooms are also done! But I don’t have any photos for you right now. I am so into the new kitchen floor that sometimes I just stand there staring at it with lovey-dove eyes. So much better than what it used to be. (Before and after photos definitely to follow.)

In other news, we have set a move-in date (despite the lack of living room liveability). It’s been absolutely wonderful living with my in-laws; you really don’t hear that every day, I know, but it’s true. I love them and have enjoyed being able to spend so much time with them since we’ve been back. But we’ve been in this strange post-Samoa transition period for a really long time now and I’m ready to get the next phase of our lives started.

I just want to warn everyone-in-the-world that we have decided against having the internet at our house. Yup. I’m for real. We lived without it for three years in American Samoa and really view it as a “want” and not a “need” now. Maybe that will change when we get in the house. Who knows? Also, I know that having constant internet access greatly reduces my productivity and I hate that. Get ready to marvel at the only two thirty-somethings you know who don’t have smartphones OR internet at home! I guess we’ll have to do friendships the old-fashioned way and see each other in person.

For three years, I lived on a tiny little island in the South Pacific called Ta'u, where I taught elementary and high school English. Much of this blog is a chronicle of my time there, and of the travels we were able to do while we were on that side of the world. Now, I'm doing a different kind of travelling in the suburbs of Atlanta, Georgia with my husband and two children.
View all posts by Cat Q. →
This entry was posted in Home Renovation, United States and tagged design, home improvement, redesign, renovation. Bookmark the permalink.