Once I Accidentally Hiked the Highest Mountain in the Country

Since today is Veteran’s Day (oh, happy day brother and step-dad!), and because every single holiday is observed in American Samoa, we had the day off. We decided to spend it with our lovely neighbor, Leafa, and a local legend, Saunoa (who is a Vietnam vet, so… dual purpose fun).

Saunoa picked us up at 6:30 and soon we found ourselves in Fiti’uta (the village on the other side of the island that is only about 7 miles away but that we very rarely go to since we don’t have a car). He wanted to take us to see the bat “cave,” which is really just a very large crater in which several hundred bats live. (Samoan fruit bats, also sometimes called flying foxes.) We’ve heard awesome things about this bat cave–that the treetops are nearly black from the blanket of bats, that the bats rise all together in a wave of majestic batty-ness, that you will never recover from the beauty of a moment so few living people have witnessed, etc, etc.

Saunoa, Leafa, and Wes at at the trail head

We walked the steep mountain trail to the crater, but there were no bats. Saunoa was baffled (batfled? is that too much?) He had never seen the crater devoid of bats. 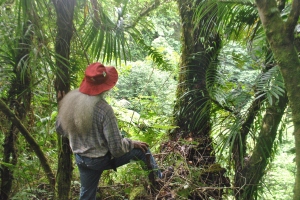 We decided to hike a little farther to another crater. Maybe the bats moved? But still no bats. We were trying to solve the mystery of their disappearance when we noticed another, newly-created and freshly-blazed trail. And then we sort of forgot about the bats.

Our mutual curiosity took us up the new trail, where we found all kinds of interesting things to look at and plants we didn’t know were up there (but no bats). We hiked a little bit more. Just when we were about to stop, the trail came out on a wide rocky path that looked like it was created by water, and which we then referred to as “the river.” We stopped and had a little lunch to enjoy the view.

The Beard looks out over the mighty Pacific

Lunch break on the mountain

We were covered in mud and I was being eaten alive by mosquitoes, but it was fully worth it. 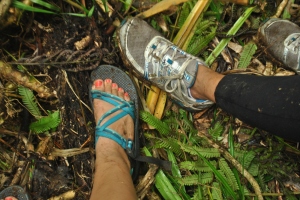 Silver fern being all dramatic and beautiful

Five mosquitoes feasting on my calf.

Leafa found a tree on the mountain that she and Saunoa had never seen in American Samoa. That was pretty cool. Then Saunoa thought maybe there would be a water source a little higher up. So, we hiked up a little more in search of it. And then a little more. And a little more.

At some point we found a trail marker joining two different color blazes (though I’m not sure the colors are significant or if they are just examples of trail tape that can be found on island). It was a PVC pipe marked with tape and a little tin scrap. It didn’t really tell us much other than…ya know, “this is a trail. keep going.” 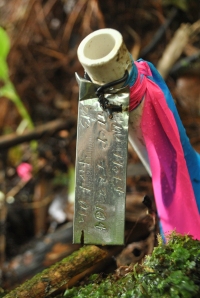 We followed the trail from the rocky path (er, the river) until we found ourselves nearly to the top of Mt. Lata, the highest peak in American Samoa. The Beard and I have been trying to do the Mt. Lata hike since 2011, but we’ve never been able to get a ride over to Fiti’uta. And then today we did it accidentally (well… most of it). Unfortunately, the path stopped abruptly just shy of the ridge, and the jungle brush was far too thick to keep going (even though we did have a machete with us, it was just too much jungle).  So Saunoa knocked a few notches in a tree at the end of the trail for posterity’s sake and we headed back down the mountain.

Saunoa cuts 4 marks into a tree for all of us

It was both super fantastic and fairly disappointing to finally hike Mt. Lata (and not even on purpose) but have to stop so close to the top. Alas, we are planning to go back sometime before we leave. Besides, we still have to find the bats.

Here are some more photos from the hike.

Giant silver fern (my favorite of all the ferns)

Totally possible that Leafa is the only Samoan woman on this island who has ever hiked Lata. She’s amazing. 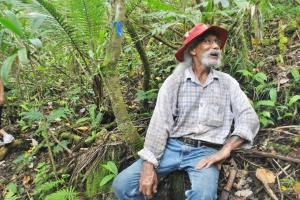 The one and only Saunoa

The best thing about this hike was who we were hiking with. Leafa and Saunoa were excellent companions and guides. Saunoa spent much of the hike pointing out flora and explaining traditional uses of different plants. Leafa’s excitement about being there was contagious. (We joked about it a lot on the trail but it could very well be true that Leafa is the only Samoan woman alive to have hiked up Mt. Lata.) Most people in the villages, and especially the women, never go up the mountain.) Just two years ago, Leafa couldn’t even think about doing this hike. But thanks to God almighty, she is well enough today to climb a muddy rainforest mountain. Just amazing. Plus, I enjoy small groups the most when I’m hiking–I love the occasional conversation but prefer the comfortable silences more than anything. (There’s nothing worse than a cacophony of loud voices when you’re trying to enjoy a quiet forest landscape.) We couldn’t have planned a better day. The Beard and I have been trying to hike in Fiti’uta for so long, but it was worth the wait to go in the company of two of our favorite people on the island.

For three years, I lived on a tiny little island in the South Pacific called Ta'u, where I taught elementary and high school English. Much of this blog is a chronicle of my time there, and of the travels we were able to do while we were on that side of the world. Now, I'm doing a different kind of travelling in the suburbs of Atlanta, Georgia with my husband and two children.
View all posts by Cat Q. →
This entry was posted in American Samoa and tagged american samoa, day hike, hiking, manu'a islands, south pacific islands, ta'u, travel. Bookmark the permalink.