Warning: This post not for the faint of heart

Happy Valentine’s Day from AmSam! I’m sure my day of cutting out hundreds of construction paper hearts and cleaning glue off of every surface of my classroom beats your fancy restaurant date and flowers, so I won’t brag too much about it.

I realized the other day that I mostly write about things I love about AmSam. So, just to make sure you don’t think that we are living some idyllic, easy-peasy life in the most beautiful place on Earth, I’ve decided to share a little bit about the other side of things.

Let me be clear on two things: One, the pictures/links below will probably gross you out (that was your final warning); and two, none of the things I refer to below have ever made me want to leave this island.

As I write this, I am blowing tiny little worms off my monitor every few seconds, waving moths away, and slapping mosquitoes off my arms and neck. All of this is happening inside a classroom at the highschool. Bugs are an issue. There are lots of them. Everywhere. All the time. Just bugs bugs bugs. When Erin and I got to Ta’u (we arrived 3 days before the rest of our group) and opened the door of the house, I nearly cried. There were spiders everywhere. Every corner, every cabinet, every spidey-hole space had several various sized eight-legged beasts holding court inside. It was terrible.

There is one particular spider here that I hate more than anything else. We have had several of them in our bathroom. It’s weird looking and creepy and gets really big and I just hate it. In the interest of protecting all the women who read this blog, I’ve decided not to post a photo here. But click here if you want to see how gross these spiders are.

Ew. I can’t believe you clicked that. Before we moved here, I would’ve screamed bloody murder if a dime-sized daddy-longleg was in the same room as me, but not anymore! I’ve just learned to shower with one eye open.

There are also giant centipedes. I’ve only seen one the whole time I’ve been here, and that one was dead. But during orientation on the main island, while we were sleeping on mats on the floor of a vocational school, I lived in constant fear of being eaten alive by one. Apparently a sting from one of these bad boys is vicious. One of the kids at my school was bitten twice (because he tried to kill one by stepping on it with his bare feet) and his foot was so swollen he couldn’t walk. Gross.

I did not take this photo. I took it from a missionary family's blog. Click the picture to go there.

A swarm of moths has recently descended on the Manu’a island chain. At first it was just a few here and there, but then the moth population exploded all over my front porch. We receive as guests in our home around 50 moths a night, thanks to the 1” gap in our front door.

Here’s a photo from another outer-island volunteer of the moths on her island:

And here’s a lovely look at our living room ceiling late one night:

Moths in our living room

But this is the real experience:

Swarm of moths on our front porch

Living in the perpetual sunshine means that every precaution must be taken against serious sunburns. I have been pretty rigorous about putting on sunblock but somehow missed a huge portion of my back a few weeks ago when some of us went to a private beach for a few hours. (Side note: we encountered some wild pigs on the trail on the way there!) Naturally, I ended up with a pretty painful and icky sunburn that blistered and scabbed and peeled for a week. (Don’t worry, it’s better now!) Here’s a glimpse:

The first “injury” the Manu’a group encountered came in the form of a rare condition we know as “Erin’s legs.” I don’t really know how to describe it. She has some sort of reaction to mosquito bites. A small percentage of the population here has the same reaction, but in general it’s not wide-spread. But it is gross. The bite starts out like any ol’ bite. Red, itchy, swelling, etc. By the next day, however, it will have grown twice its size, opened, and began oozing and being generally disgusting. Mosquito bites are unavoidable here, so Erin’s legs quickly deteriorated. Here’s a photo of her bandaged legs in October:

This is not even close to as bad as they've been

When Mitch took that photo, we were all very concerned and “Oh gosh, Erin, that’s terrible!” about her legs. By Christmas break, I’m sure Erin was wishing her legs were still like that.

There are also the student infections. Here’s a photo I took the other day of a little boy’s foot at school. 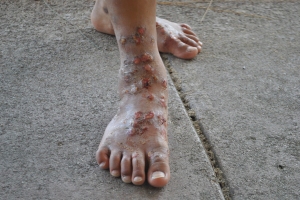 He’s my neighbor, so I see him fairly often. That infection happened suddenly and has yet to be explained. Thankfully, the doctor gave him some cream and it has gotten much better this week. A lot of the children, especially in the lower grades, have infections like that one. What’s really shocking is that the kids don’t seem to notice–they never cry or complain about cuts, bites, bruises, or sores. I shudder every time I see it because I know I’d be in tears (ya know, on the plane, on the way to a hospital, convinced that my foot was about to fall off).

And then there’s the puppies…Oh the puppies. They start out so adorable and full of life. Eventually, they become flea-ridden little bags of bones and either get mauled to death by bigger dogs or die of starvation (even though we feed them! we really do!). 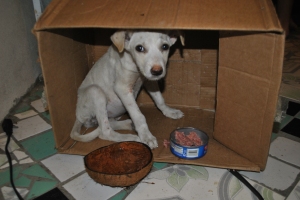 This is what they look like before they die

So, now you know. There are things that are not so wonderful here, too. Living in Manu’a is quite a change from our fairly sanitized, bug-free life back home. But in spite of the icky-icks, the Beard and I are considering staying here next year. (Who didn’t see that one coming?) Please pray for us as we make this decision. The bugs are gross, the bites are disgusting, and yes, we miss our family and friends more than I could explain, but then there’s this:

See why I love these kids?! 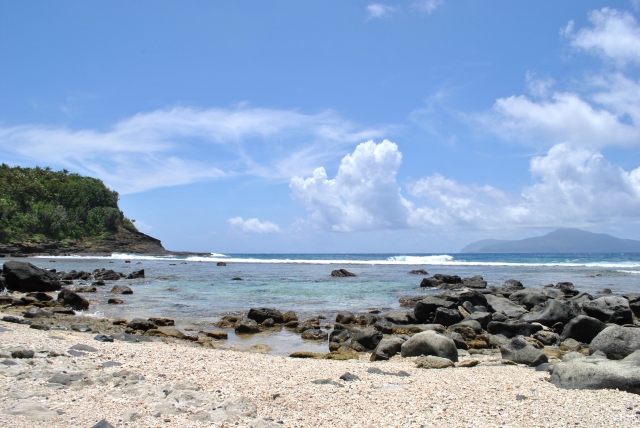 To'a Cove. Home of my sunburn.

And all of this:

Some of Erin’s girls in the cafeteria

Two of my girls on the bus. So sweet.

View of the church in Ta’u

Some of the HS teachers

They’re pretty much the best

Some of the kids at school

My kids being kids at a class bday party

Some of the kids on the bus

To’a Cove. Home of my sunburn.

Grilling for the Superbowl. Check out Erin’s legs!

Where else could a professional highschool teacher look like this?

For three years, I lived on a tiny little island in the South Pacific called Ta'u, where I taught elementary and high school English. Much of this blog is a chronicle of my time there, and of the travels we were able to do while we were on that side of the world. Now, I'm doing a different kind of travelling in the suburbs of Atlanta, Georgia with my husband and two children.
View all posts by Cat Q. →
This entry was posted in American Samoa and tagged amsam, beach, bugs, creepy, Faleasao, happy valentine, infections, international, islands, manu'a, photos, Samoa, sunburn, ta'u, valentine s day, wellness. Bookmark the permalink.

10 Responses to Warning: This post not for the faint of heart