Thanksgiving in the South Pacific

Our Thanksgiving was a lot like it would’ve been at home, but with more beaches, sunshine, snorkeling, and puppies. (Okay so nothing like home.) It was strange being away from family, but we ended up having a great time with our fellow WorldTeachers. We had two volunteers from Ofu, three from Tutuila, and the girls from Ta’u over to our house for dinner and ended up with all the staples of an American Thanksgiving–turkey, stuffing and dressing, green bean casserole, mac n’ cheese, mashed potatoes, and even pumpkin pie! 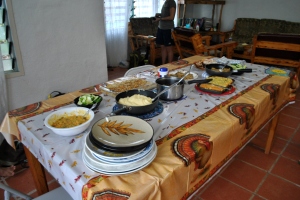 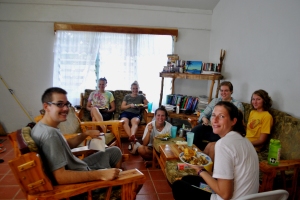 The day after Thanksgiving was a school holiday, but teachers still had to report to school at 7am. I just sat in the computer lab until 10:30 or so. Even though I was told we would have a meeting, we didn’t do anything. It was pretty lame but T.I.S. After that, we hopped on an alia boat to Ofu and Olesega. The boat came up on a huge school of skip jack so we took a little detour to chase the fish. The crew had three lines running at once and were catching them every minute or so. They probably caught at least 25-30 fish in less than half an hour. Then they cut one up on the boat and we ate it right there. They ended up giving us two and we had a fantastic sashimi dinner at Erin and Jessica’s. So yummi.

The crew on a rather large alia boat

After they pulled them in, Erin got to beat the fish to death with wooden sticks!!!!!

The next day we headed to the bridge so the Tutuila people could jump off. This time, I stood on the ledge for a good 15-20 minutes trying to psych myself up to jump but in the end the “my job is to make sure you do NOT jump from great heights” part of my brain won. After the bridge, we headed to the National Park area to see that beautiful beach. I snorkeled for what felt like hours, until a big rain storm came and we had to take shelter in the hurricane house.

We came home on Saturday afternoon and I didn’t do much of anything. There was no church on Sunday so I (seriously) stayed in our room all day watching 30 Rock. Pretty uneventful I guess…oh, there was a crab in our bedroom on Sunday night. Fun fun. Meanwhile, Wes was at a neighbor’s house learning about the Samoan umu. 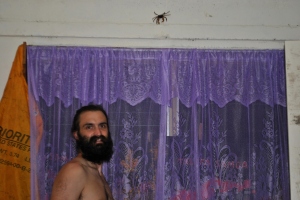 In other news, another dog in our village had puppies! They are so cute–er, I guess I should use the past tense…I am not sure how big the litter was at first (I’ve heard 9), but six of them came to live on our porch about two weeks ago. I got a little attached to two in particular–Cutie McCutiepants (or just Mr.McPants for short) and this fluffy little ball of fur that looked a lot like Autumn did when she was little. One of the dogs was murdered by our dog shortly after dinner on Thanksgiving. (Trust me, your holiday house guests do not want to listen to the wails and whimpers of a dying puppy for hours; it was pretty bad.) Then on Sunday, Mitch discovered our Autumn-look-alike friend (I called her Winter) dead on the side of the road. I haven’t seen Mr.McPants since we left for Ofu so I fear the worst. Mitch saw her yesterday but she’s the runt so I don’t think she’ll make it. Wah. I know it’s just the way things are, but it sucks. I’ve heard that a vet comes to the islands every once in a while but that people don’t like having their dogs fixed. I guess it’s better to watch them all fight to the death?

The Autumn-esque fluffball I called Winter

Before the Thanksgiving weekend, we had an assembly at school. The entire school was divided into four cultural groups–Hawaiian, Maori, Samoan, and Tongan. Each group prepared traditional food and a dance from their culture. It was pretty adorable.

K-5 and Level 1 students in the Hawaiian group 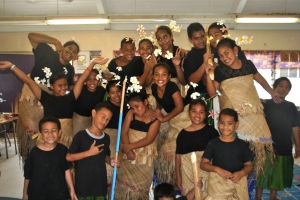 Mondays are generally pretty difficult days for my class, and the Monday after Thanksgiving was a lot more miserable than usual. It seems my students have not only forgotten all the material we’ve been learning all year, but they also managed to forget all of our class rules. Suuuuper. It’s probably because I spent so much time bragging about how wonderful they are while everyone was here. And then yesterday one of Erin’s students fell on his pencil and it stabbed him in that soft area beneath his jaw. Yikes. I honestly don’t know how elementary teachers do this year after year. Even in a school this small, it’s a lot of work and you have to deal with a lot of blood and infections and vomit and boogers. But most of the time it’s worth it. When they’re good they’re GREAT, and when they’re bad it’s really really hard to remember that they are children and not evil miniature zombies sent here to make my life miserable. Some days I think this must be the best job in the world…but none of those days have happened this week. Oh, but the other day I saw one of my students fall completely out of his chair while he was sleeping. Like, his whole body hit the ground. That was pretty hilarious. (Don’t worry, he wasn’t injured. You would’ve laughed too.) Eh, this is the teaching life I guess.

Just to help everyone remember that my students are usually pretty cute and fairly awesome, here’s a class pic from Halloween:

For three years, I lived on a tiny little island in the South Pacific called Ta'u, where I taught elementary and high school English. Much of this blog is a chronicle of my time there, and of the travels we were able to do while we were on that side of the world. Now, I'm doing a different kind of travelling in the suburbs of Atlanta, Georgia with my husband and two children.
View all posts by Cat Q. →
This entry was posted in American Samoa and tagged Faleasao, international travel, islands, manu'a, Ofu, photos, puppies, School, snorkeling, South Pacific, ta'u, teaching, Thanksgiving, volunteering, worldteach. Bookmark the permalink.

4 Responses to Thanksgiving in the South Pacific