A day in the life: the typical, the bizarre, and the extraordinary

School was cancelled yesterday morning because the water in Faleasao (possibly on the whole island?) was not working. The Faleasao kids, who all live within a 3-minute walk of the elementary school, were sent home around 7. About ten minutes later, while we waited for the bus to return to pick up the kids from Ta’u, the water was turned back on and school was un-cancelled. But because we had already sent the Faleasao kids home, none of them came back. Even though nearly every student in the village can see the elementary school from their house, and several of them walked by on their way to the store and saw school in session. At any rate, school was cancelled for about 25% of the students over a non-problem.

When I got home from school yesterday, Mitch was cleaning out the dish drying rack and discovered a crab hiding in there. I have no idea how it got in the house, onto the kitchen counter, and into the drying rack, but there it was in all its purple crabby glory. Just chillin’ with the dishes. Like crabs do, apparently. 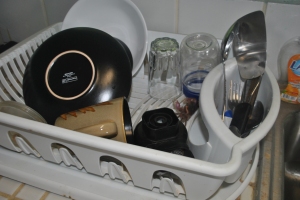 Can you spot the crab?

Later, around 7 or 8, when I was thoroughly tired of reading and staring at the walls finally became boring, I decided to take a walk to the store. It’s beautiful here at night and I can always come up with a million excuses to walk the length of the village by myself. On the way home, the usual chorus of children singing “Hiiii Miss Cathryn” followed me from Leafa’s store all the way home, and three kids ran with arms outstretched directly into my thighs, per usual. One of them asked me if I’d seen the rainbow. It was already dark and the light from the full moon was pouring over the mountains behind our house. “What rainbow?” I asked. They pointed to the water. There was a white stretch of light in a perfect bow, sitting directly on top of the ocean. At night. You could barely make out the ROY G. BIV, but it was there. Wes was spear fishing on the other side of the village, by the wharf, and he saw it too. Tautua told us that the last lunar rainbow happened in 2006, so we are blessed indeed to have seen it.

I thought that I’d miss things like washing machines, dishwashers, and air-conditioning. But no. Washing dishes by hand is not even slightly inconvenient, as it turns out. And as for washing machines, well, you get used to filling the kitchen sink with your dirty laundry. It’s actually somewhat soothing, all the swishing and scrubbing and watching the dirty water run out of your clothes. It occurred to me on Sunday–while I was feeling proud of how productive I’d been after washing three loads of clothes–how insignificant of an accomplishment that would have been at home. Three loads of clothes! ha! We have a fale full of clotheslines, too, and there isn’t a thing I need to wear so desperately that it needs to be dry in an hour. It can wait. Everything else does. And who needs air-conditioning when you have a constant ocean breeze?

It turns out that the modern convenience I miss the most is the trashcan. I know. I never would’ve put them in this category, but there aren’t any proper trashcans on our island, save the large green bins we put out in front of house as though the trash service will be here on Tuesday to pick them up. (I’m not sure any of us really know what happens to the trash, but I’m starting to think that our neighbors just burn it with theirs.) In our house, we have a trashbag that we tie to the handle of the oven door. At school, we use empty cardboard boxes without liners. It has only taken two months for me to give up on keeping the ants out of my class and my kitchen. Now I know that there’s no use; whatever it is, the ants will come soon and carry it away. But it would be nice to have a trashcan that rats can’t tear holes in at night. Something with a lid to keep the smell out. Oh, imagine! How bright and shiny and clean it would be!

For Wes’ 30th, we hiked up to a lookout on the road that connects Faleasao and Tau to watch the sunset. Not a bad way to start the next decade. 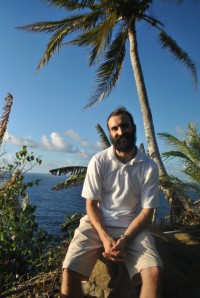 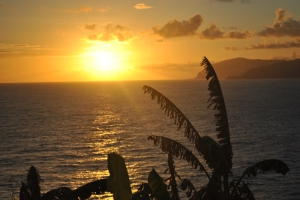 Reminder: I no longer have access to Facebook. I do have a google+ account but don’t really get on there and who knows how long before that’s blocked too? Anyway, please email me if you need to get in touch. (Or send me a letter!!!)

For three years, I lived on a tiny little island in the South Pacific called Ta'u, where I taught elementary and high school English. Much of this blog is a chronicle of my time there, and of the travels we were able to do while we were on that side of the world. Now, I'm doing a different kind of travelling in the suburbs of Atlanta, Georgia with my husband and two children.
View all posts by Cat Q. →
This entry was posted in American Samoa and tagged crabs, gardening, modern conveniences, rainbow at night, Samoa. Bookmark the permalink.

2 Responses to A day in the life: the typical, the bizarre, and the extraordinary