The English committee at Faleasao Elementary hosted a 9/11 memorial assembly today. We had a banner competition and each class performed a song or poem. Afterward, we watched a few slide-shows about 9/11 and then had a balloon release (students wrote messages to or prayers for those affected by 9/11 and put them inside their balloons). It was probably the cutest thing ever (thank God we were not able to get a helium tank sent out here, so the balloons were not released over the ocean, as originally planned! yay!)

Anyway, here is the first banner my class made. 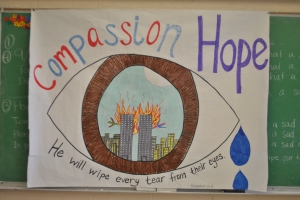 And this is the second banner. One of my students brought this in this morning (even though we already made our banner…) so I let them color it this morning and we hung it outside of our class.

Here are some of my students’ prayers (for the balloon release):

If you have Google+, you can click the hyperlink below for a video of my class performing the song we wrote (with a lot of help from the girl in the middle’s dad!)
Here’s the link.
I know. They’re adorable. We made those little flag hats for them to wear, too. Everyone loved their song and they went wild over Allyson’s sergeant routine. :) They had so much fun and I am super proud of them!

I’m trying to find a website where I can upload videos but everything is blocked. Wah. I’ll post it here if I ever figure out how to do it!

Oh! And I was on tv the other night! My neighbor, Jolla, yelled out her window to tell me to come watch; they aired my interview with the Dept of Ed guy! Wes was on, too! I looked for the video online but it appears that the local station here doesn’t have a website, haha.

For three years, I lived on a tiny little island in the South Pacific called Ta'u, where I taught elementary and high school English. Much of this blog is a chronicle of my time there, and of the travels we were able to do while we were on that side of the world. Now, I'm doing a different kind of travelling in the suburbs of Atlanta, Georgia with my husband and two children.
View all posts by Cat Q. →
This entry was posted in American Samoa and tagged 9/11, memorial, Samoa. Bookmark the permalink.